skip to main | skip to sidebar

I know, I know! You all have missed me right? I haven't written anything in months - but it isn't my fault! It has done nothing but rain and rain here, and my foster humans just refuse to bring their lap top out to me. They say I'll get it all muddy. Really, how rude of them! Don't they know I have an adoring public who wants to hear from me??

Well, I finally got a little break and am getting to use the computer. We've had a lot of excitement around here. First, some very sad news. A month or two ago, my foster human Kristin came out to de-worm me. Yuck. That stuff is super-nasty and I don't know why humans feel the need to shove it down our throat! Well, she shoved it down my throat and I spit it out. It fell on the ground and her dog gobbled it up. She didn't think anything of it, and I was just happy someone else ate that garbage and I didn't have to eat any more. But a few hours later, her dog started to have seizures. They rushed her to the veterinarian but lost her the next day. I feel so bad. I should have eaten my ivermectin and not let the dog get any. Kristin and her husband cried and I felt even worse. So now... I want you to know that dogs and ivermectin doesn't mix well! Apparently some breeds are very sensitive to ivermectin and it kills them. You can read one story here: http://special.equisearch.com/blog/horsetalk/2009/06/warning-your-dogs-and-ivermectin.html 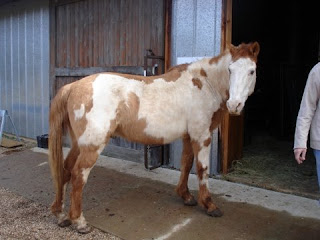 On a good note... I'm putting on weight and I've become such a handsome man. Look at me, would you even recognize me? And now that I'm putting on weight, I feel so much better! I can buck and run and play! I might be an older guy, but I've got plenty of life left in me! I hear the rescue is going to put me up for adoption soon. Is there someone out there who would like to give me a home for the rest of my life? I might be sassy sometimes, but I'll make you smile!

Now, I have to go run and buck a little. But seriously, think about giving me a home of my own!

Dreaming of my own family,

Tex from Bluebonnet
Posted by Cowgirljenn at 12:33 PM